The Most Talked About Short Sellings of 2021

As the year comes to a close, it would be an understatement to say that the stock market this year has been the metaphor for a roller coaster ride. More companies saw their IPOs this year than any other, and dozens of companies faced the storm of shorting.

A significant number of said companies has been covered by analysts here at 2iQ. In this blog, we’re recapping the companies whose share prices tanked significantly. 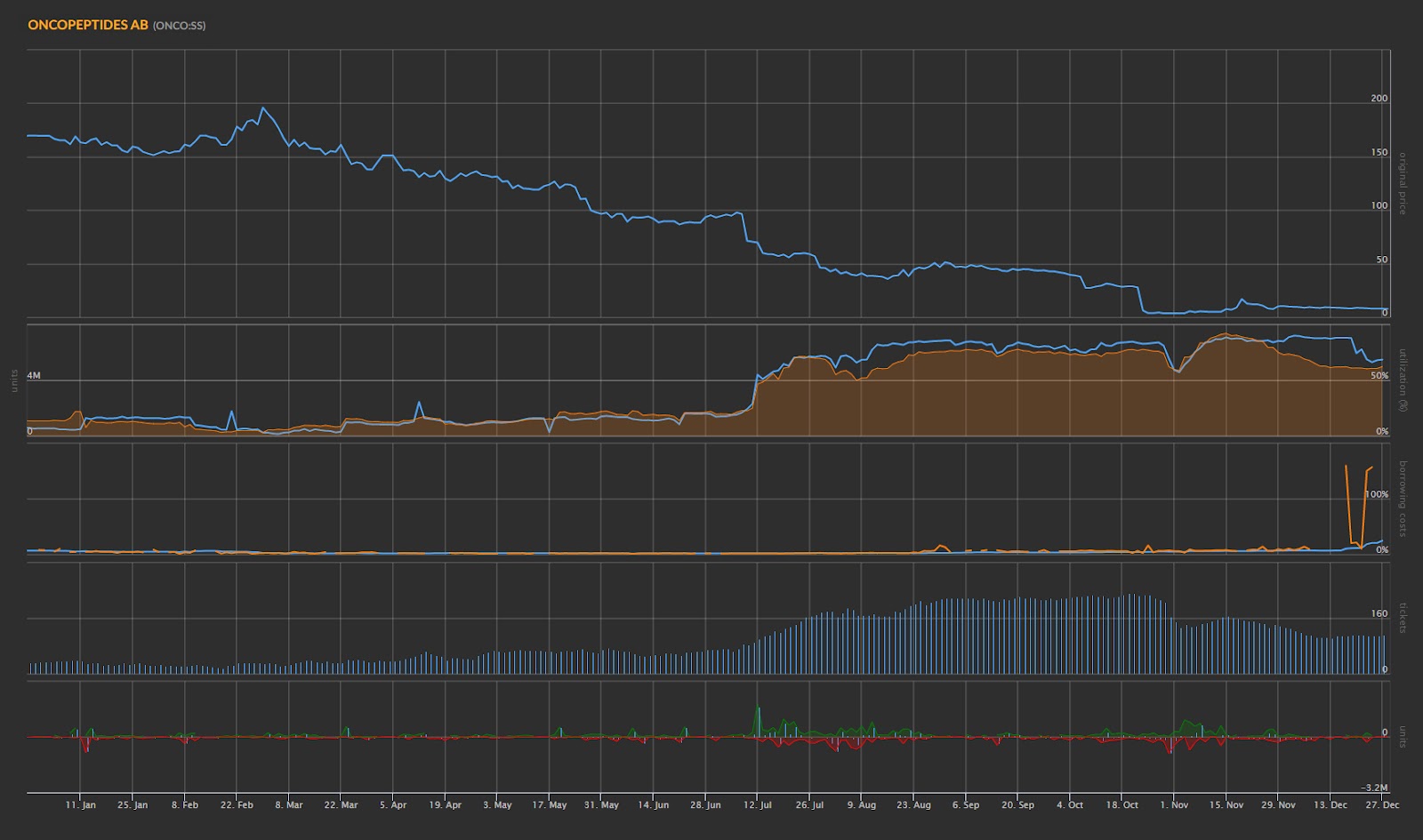 Although the company’s Pepaxto drug received approval from the FDA earlier than anticipated, headlines in July stated that the drug gave alarming results in it’s studies and the FDA issued a warning.

Earlier in October’21, Oncopeptides announced its decision to withdraw Pepaxto from US Markets. Adding to this, it was announced that the company would pull back its sale and marketing moves in Europe and US.
All of these may have aided the dropping of $ONCO’s share price, even slashing down the company’s M.Cap. to the current 67.67 M USD.t

Since April 2021, the price of $INTZ has fallen by nearly 79%, and has a value of $3.66 presently. Compared to back in May’21, the utilization rate has significantly dropped to 14.8%, but stock prices continue to descend.

In April 22, 2021, a law firm divulged a complaint filed against the company. The complaint alleged that Intrusion misled it’s investors regarding its operations, noting various discrepancies and missing information in the disclosures regarding its latest product, Shield, a platform that protects users against cyber attacks.

Once priced at an eye-popping high of $124.09 in Feb’21, $EH fell by roughly 63% in four days. A research by 2iQ analysts believed that a short selling report by the financial research firm, Wolfpack Research, was to blame.

The report stated that ‘EH has perpetuated its story with a collection of lies about its products, manufacturing, revenues, partnerships, and potential regulatory approval of its purported main business.’

Furthermore, EHang stated losses of $11.4 M in its Q3 on revenues of $2 M, which was the same as its second quarter revenue. Come present day, the shares of the Chinese drone manufacturing company are worth $14.89 each.

Published in August’21, the report regarding China Evergrande’s dire market situation stated that the company had been facing liquidity issues. In early December 2021, the group faced a reported debt payment of $82.5 million which it failed to submit within the planned deadline.

While the company’s utilization rate has significantly lowered, a recent news update divulged that China Evergrande will be resuming construction and 92% of its projects have been restarted. This could be a silver lining that 2022 has high hopes for $HKG:3333.

Recently, $WKHS stock price rose but still fell short in what was an overall green day for the stock market on December 27, 2021. The stock is now valued at $4.88 per share, with its utilization rate still hovering between 90% and 95%.

In July 2021, the company’s share price nosedived by nearly 30%. The same month, Lordstown Motors (NASDAQ: RIDE) went down the slope due to a probe into the company by the U.S. Department of Justice. $WKHS followed $RIDE because of it’s 10% stake in the latter.

It was later stated that in September 2021, $WKHS shares had plummeted to their lowest price in nearly fifteen months.

A voice-chat app of Middle Eastern origins, Yalla was initially acclaimed for being the first tech stock from the UAE to be listed on NYSE. But less than two years after its IPO, the app was targeted by short sellers Swan Street and Gotham City Research, which questioned its user numbers. Yalla’s quarterly results also aided the stock price’s fall.

On the contrary, there were two stocks which made noteworthy comebacks this year despite severe short selling throughout the year.

The entertainment company’s short selling report, dated May 21, 2021, showed its utilization rate as having risen to 96%. $AMC was still recovering from sales slouching during the 2020 pandemic. Investors everywhere were warned of the risk involved in holding $AMC stock.

Regardless, $AMC had obtained a following on Reddit, even getting its own following, where it’s most ardent supporters referred to themselves as apes.

On December 17, 2021, with the release of Marvel’s Spider-man:No Way Home, $AMC outperformed the market, with its value rising to $29.12, and it’s M. Cap. skyrocketed to $12 B the same day. AMC’s M.Cap. is currently $14.66 B. Since then, $AMC has been steadily rising but is still underperforming in the overall market. The company’s utilization rate is 77.47% at the moment.

Although the Omicron variant has been swarming about, AMC’s future still looks bright as people are returning to movie theaters.

A Short selling report on the company made news, but since then, this trend has largely evaporated. On December 1, 2021, it was announced that Just Eat had completed its acquisition of Grubhub, in a deal worth roughly $7.3 B. Just Eat also made its foothold stronger in Europe as well as the UK. Less than a week ago, Just Eat announced a partnership with One Stop, the retail convenience store, thus extending the former’s grocery offerings.

Most likely due to the highs and lows recurring throughout the year, the stock market too took some blows. There have been dozens of companies who still experience shorting but some have nevertheless fired ahead.

Pandemic-Survivor, Hertz, Now Joins the League of Buybacks for 2021